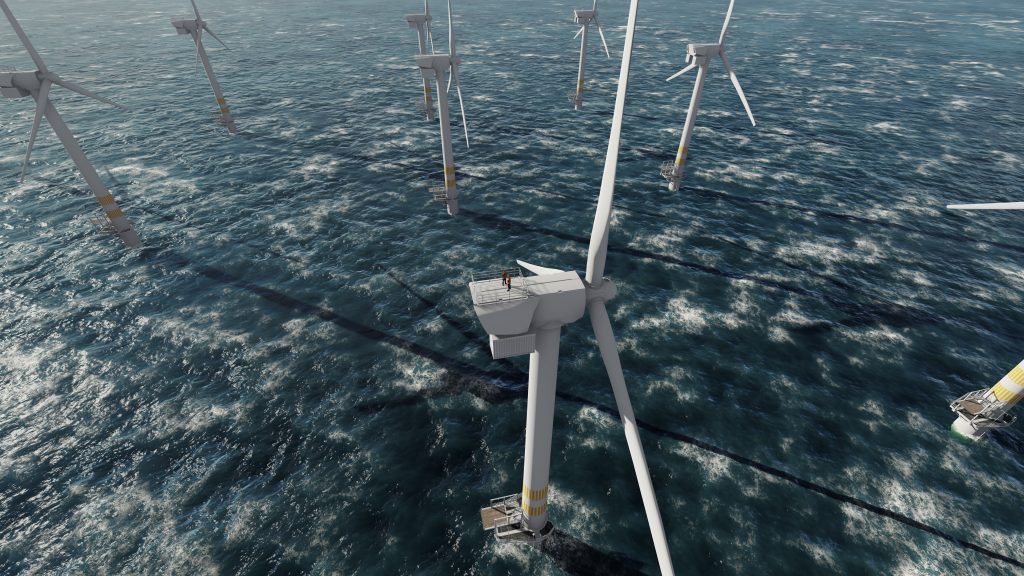 A consultation process to identify suitable areas for an offshore floating wind farm in the Celtic Sea has begun, with the intention of using the facility to produce green hydrogen.

Source Energie has been working for some time to identify both medium- and long-term sites for development of floating offshore wind, and has now come together with ERM Dolphyn, a leading innovator in green hydrogen production. The joint ambition is to seize the opportunity provided by the Celtic Sea, and to develop a floating wind farm that produces green hydrogen rather than electricity. Green hydrogen is an ultra-low carbon fuel and forms an essential part of our low-carbon future, reducing our reliance on fossil fuels.

The first site under development is called ‘Dylan’. It has a target deployment date of 2027/2028 and is located approximately 60km off the Pembrokeshire coast, west of Milford Haven. This site has been identified on the basis of a phased site selection process, which has included regional resource and constraints analysis, and a high-level shipping and navigation review. Both parties agree that the location is ideal, as it offers good energy-generating conditions (>10m/s average wind speeds), strong expansion potential, and has a number of viable low-impact pipeline routes to areas of existing and growing hydrogen demand.

Future expansion could provide more than 2GW of energy, which would provide enough hydrogen to make a material impact on local and national decarbonisation targets, sufficient to heat around one million homes with no carbon emissions at the point of use. The full-scale development also hopes to bring several thousand much-needed jobs and training opportunities to the region, through assembly, construction and operation.

Kevin Lynch, CEO of Source Energie commented: “We are delighted that The Crown Estate plans to assign areas in the Celtic Sea for floating offshore wind energy, and we are actively engaging in the consultation process. We are also excited to work with ERM Dolphyn to take offshore green hydrogen production to significant industrial scale. Source Energie is sure that green hydrogen will play a significant role in energy storage, as a fuel for future transportation needs and as a source of hydrogen for industrial processes.”

Steve Matthews, commercial director for ERM Dolphyn said: “Areas of deep water around the UK and Ireland provide great opportunities to generate green hydrogen at scale, and to deliver this carbon-free fuel to areas of emerging demand, where it can be used as an alternative to fossil fuels. Following on from our projects in Scotland and the North Sea, Dylan is an important additional step, which will help decarbonise areas around the Celtic Sea region, including South Wales. We are delighted to be working with Source Energie on this exciting prospect and very grateful for the support provided for Project Dylan by the Welsh Government”.

The ERM Dolphyn opportunity in the Celtic Sea (Project Dylan) is supported by the Welsh Government Smart Living Initiative, as part of its commitment to developing the national hydrogen economy, as well as objectives from Wales’ Hydrogen Pathway for driving demand, green hydrogen production, and inter-sectoral synergies.

The support for hydrogen production at scale is embedded firmly within the policy framework of Net Zero Wales and the Welsh Government’s second carbon budget (2021-2025). More detailed policy work is also in development, focussing on support for significant deployment projects alongside a skills and qualification framework in the mid- to long-term to ensure Wales is well-positioned with respect to hydrogen production and fuel cell technologies.

As part of its commitment to net zero and the Wales Hydrogen Pathway, the Welsh Government has funded phase 1 and phase 2 studies to explore the suitability of the Celtic Sea to combine offshore floating wind and hydrogen production. The final report on phase 2 of the study will be published soon.